10 THINGS THAT HAPPEN WHEN YOU STOP DRINKING COFFEE 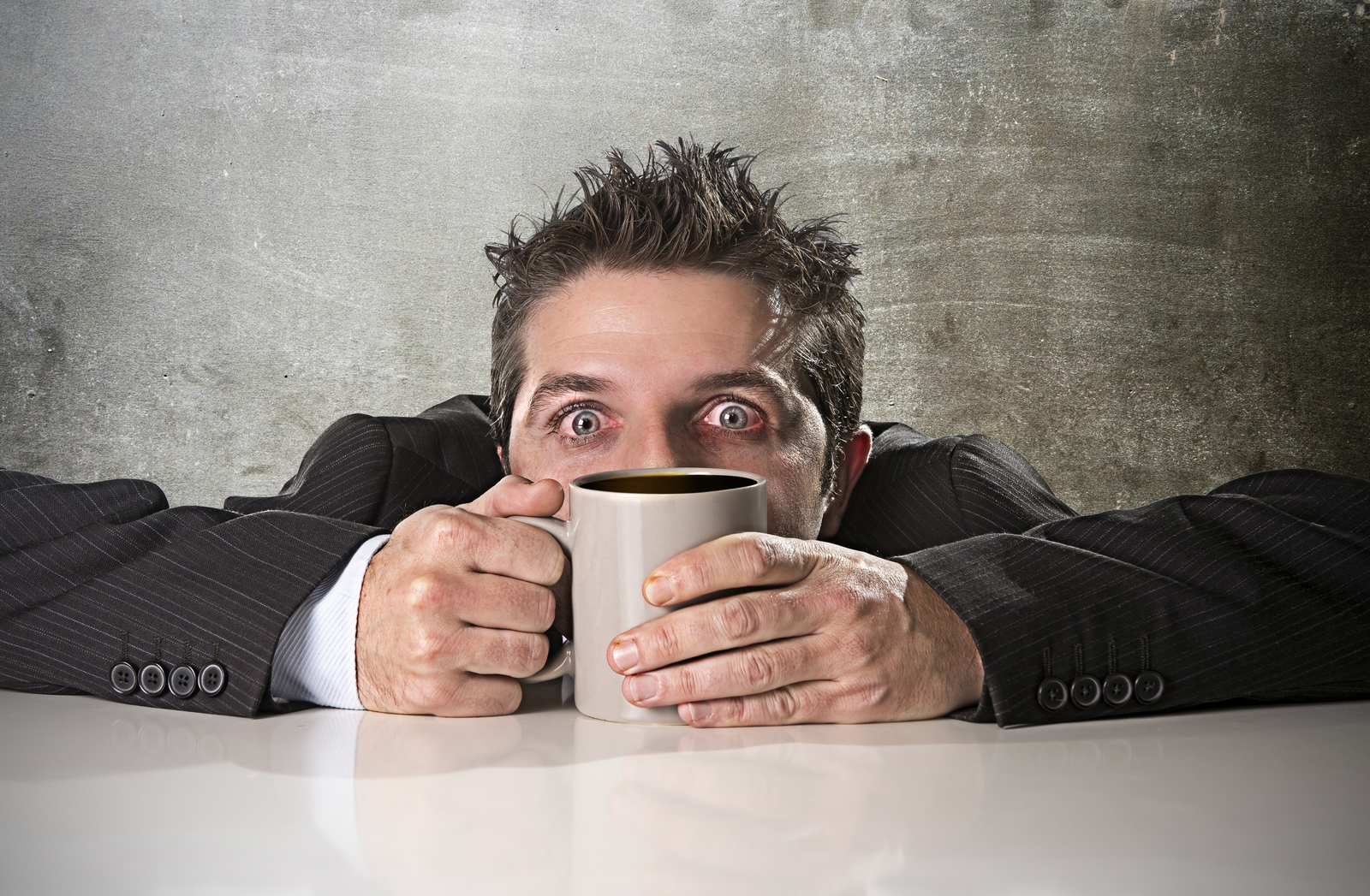 Coffee. Java. Cup of Joe. Brew. Jitter Juice. A hug in a cup. Morning Tequila (ok, I made that last one up completely).

It’s the one thing that most people can’t do without. Walk to work in the morning and you’ll witness hundreds of coffee disciples worshipping their paper cups (or sustainable cups, more frequently), heads bowed, their steps getting increasingly more spring with each and every sip.

But what would happen if you didn’t have it?

Over the past month or so I have been working on getting better quality sleep at night. I reduced my caffeine intake slightly - three shots maximum during the day, down from four to five shots - and also stopped drinking coffee in the afternoon completely (coffee in the afternoon doesn’t affect my quantity of sleep, but it does affect the quality).

And guess what? My sleep improved quite markedly.

Then I wondered….. what if I gave up coffee altogether?

Now, let me set the record straight. I didn’t do this because I thought it was healthier to abstain from that caramel-brown goodness. On the contrary, the vast majority of coffee research over the last ten years is telling us that coffee (in the right quantities) can increase longevity, has huge antioxidant properties, and might even decrease the risk of certain types of cancer. On top of this, caffeine is known to boost focus and cognitive function.

So, I was never going to give up coffee completely, but I wanted to see what would happen if I went without for four days. And if I could learn any lessons about my future coffee intake. Here’s what I found:

My god the headaches! Day one without coffee and by 2pm I had a terrible headache. Not a migraine-type of headache and not really an acute pain. But I had a dull, thudding ache that felt like it was resonating from my shoulders up to the top of my skull. This barely stopped for a couple of days, peaking around lunchtime on Day 2. I understand that all the effects are different for different people, but from what I’ve read, the headaches are pretty much common.

At 4pm on day one I actually had to lie down and rest my head. Sadly, I had to also get on a plane that night. Bad timing.

Caffeine blocks a chemical called adenosine from getting to the brain. Over the course of a day, adenosine builds up and eventually makes us sleepy by ‘switching part of our brain off’ (a terrible analogy, but easy to understand).

When you drink coffee over time, the body responds by producing more adenosine because it can’t figure out why the ‘sleepy’ response isn’t working. When you stop drinking coffee, and there is no longer any caffeine to block those adenosine receptors, all of a sudden that extra adenosine is having the biggest sleep party you could possibly imagine.

Even on that first day, at 4pm when I put my head down because of my headache, I could easily have closed my eyes and gone to sleep for an hour or two. The next day, I had a workshop to facilitate. After the workshop, I caught a cab to the airport and slept the entire 45-minute drive.

I couldn’t really describe the general feeling. You just feel ‘off.’

But on day three it struck me. I felt like I was jet-lagged. And thinking about the effect that coffee has on our sleep-wake cycle, maybe that was exactly what was happening. My body clock was completely screwed up due to the absence of the artificial regulation I impose on it by drinking coffee two or three or four times a day. In fact, using coffee strategically is one of the best things you can do to combat jet lag, as it can reset your internal body clock. Without caffeine, my body clock was trying to go back to its own rhythm - which is obviously slightly different from the artificial rhythm I’ve created over time (stupid body clock!).

And that is what my body was craving. I wanted sugar. I wanted chocolate. I wanted pastries. Unfortunately, I was also travelling to the hotel buffet was getting a workout. After day two I realised what was happening and tried my best to exercise some self-discipline. But it was really interesting how my body was responding to try to get back to what it was used to.

Athletes use caffeine to get the most out of their workouts. If you do a time-to-exhaustion test -either running or cycling - you can get a 5-10% increase in your test score just by ingesting around 400-500mg of caffeine prior to the test. This is mainly because caffeine has an effect on our ‘perceived effort’. Put simply, when things start to get difficult, caffeine makes us feel like things are easier.

On day one I did a cycling workout, consisting of a set of intervals at a given power output (this is significant, as it is a controlled measure - power is completely consistent). Usually, this effort would be pretty easy for me, but on this day - without caffeine there to help me - the effort was different. I wouldn’t call it really hard, but it definitely took some concentration and more willpower than usual for that particular session.

On day three I went for a 30-minute run, where I was running easily on the way out and hard on the way back (15 minutes each). On the way back I decided not to look at my watch at all, and just run hard. And I went really hard - it nearly killed me. At the end of the effort I looked down at my average pace - it was the pace I would usually run in a moderate effort. I was gutted.

6. No Coffee = No Discipline

As we get tired, our self-discipline decreases. Our decision making also suffers (see this article on decision fatigue). So without caffeine on board, this just happens earlier in the day and is more pronounced. Add in Number (4) above (you crave junk food) and this can be a disaster.

I had to use every ounce of self-control to eat relatively well instead of giving in to those sweet-tooth cravings. I also noticed that my gym workouts were lacklustre to say the least. I took too much time, procrastinated, and ended up answering emails and checking Instagram. My 45-minute workout took me around one hour, ten minutes.

7. Focus is a Struggle

This was the worst part about this experience for me. Productivity is a huge part of who I am. Staying focused, completing things efficiently, shutting out distractions…. these are all things that help me be at my best every day.

Without caffeine, this was really difficult. Caffeine has been proven to increase focus and attention and even problem solving and cognition.

I found that when I was doing tasks, I was easily distracted or chose to procrastinate more often (I am definitely a non-procrastinator in my caffeinated life!). On day two I had a workshop to facilitate, and my ability to stay ‘in the moment’ definitely suffered. I felt tired and by 11am my eyes started to glaze over when people were having discussions (sorry to those people!).

On day three I had a really important meeting which I’m embarrassed to say did not get my full attention. At all. Fortunately, it was short so the client probably didn’t really notice (I hope).

Weird, huh? Surely if I’m giving up a stimulant, my heart rate would decrease, right? Wrong. I've spoken before about how I quantify my physiology with the use of the Oura Ring  - This tracks my resting heart rate at night (as well as sleep and respiratory rate). Unfortunately, in contrast to what I thought would happen, my overnight resting heart rate was about 6-8 beats per minute higher than usual.

Apparently, this is due to a phenomenon called caffeine rebound. When we go without coffee, our bodies start to react (I guess this is similar to quitting any drug). So, short-term, heart rate goes up, the respiratory rate goes slightly up. I didn’t see much change in my quality of sleep, which at least is a wash…. but I was hoping that my sleep would get better.

YES!! At the end of day three, I started to feel normal. On day four I woke up feeling pretty good. My headaches were gone, I didn’t have the junk food cravings I was having earlier in the experiment. I also had a workshop and maintained complete focus throughout (yay).

This whole process took me four days. I am sure that the length of time will be different for different people depending on how much coffee you drink currently, how you metabolise coffee (which is an individual trait), and how long you have been drinking coffee. In my case, I was originally drinking around 400mg per day of caffeine, my DNA reports tell me I metabolise coffee normally or slightly slower than normal, and I haven’t had a break from coffee in the best part of 20 years.

On day four I honestly felt like, physiologically at least, I could give up coffee for good. But…. I love the taste, the social aspect and the way caffeine helps me concentrate, so that’s not going to happen.

10. When You Re-Introduce Coffee it is AMAZING

Day five. Double shot after breakfast. It was incredible!

As I mentioned before, athletes use caffeine in training and racing to get the most out of themselves. What some athletes will do (especially if they are very caffeine-tolerant), is that they will reduce their caffeine consumption (or even stop it) in the week leading up to a big event. Then when the event rolls around, they re-introduce caffeine in their diet so they get the biggest kick possible.

On this day I had a half-day workshop with a client, which I have to say is one of the best workshops I have run. I was so focussed and engaged, and my brain was just firing.

So what did I learn?

I learnt that caffeine is great. But caffeine dependence probably isn’t. I am quite amazed at the effect that cutting caffeine out of my daily routine had on me in a lot of different aspects. It was actually a little scary. So I don’t like the way that I am so physiologically dependent on it.

What I also learned was that building a tolerance to caffeine is not a good idea. It blunts the effect of the caffeine so that you just don’t get as much out of it, and also means you have to drink more and more to get the right buzz and boost in performance.

So I did learn a few lessons, and I decided to change some things (read about that here) so that I could be more strategic about how I use my daily coffees.

But one thing is for certain. The effect that coffee has on us is dramatic. And if you say ‘coffee doesn’t really affect me that much’ - then chances are you need to rethink how much you drink.